The Indian Navy on Tuesday conveyed a strong message to China in a very subtle and sarcastic way. The navy tweeted photographs of the Chines warships payrolling in the Indian Ocean Region (IOR) during the time when The Indian Air Force (IAF) conducting the latest leg of the war-time exercise ‘Gagan Shakti 2018 with fighters jest like Sukhoi 30 MKI and Jaguar equipped with anti-warship weaponry flying over the region.

In its first tweet, the Indian Navy in a very sarcastic way said, “#MaritimeDomainAwareness @indiannavy extends a warm welcome to the 29th Anti-Piracy Escort Force (APEF) of PLA(N) in the Indian Ocean Region (IOR). Happy Hunting.”

Half an hour later in its second tweet the navy posted a map of the the Indian Ocean Region stating that 50 combat-ready Indian naval warships were carrying out continuous surveillance of the area. 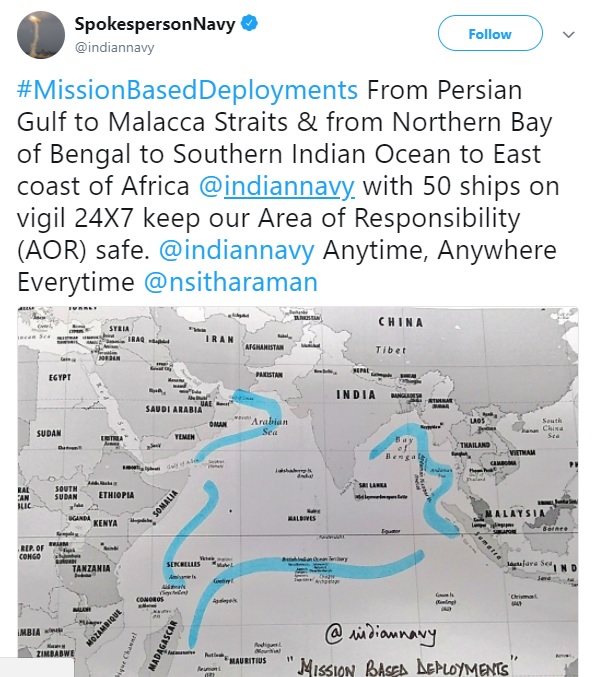 For the first time The Indian Navy has resorted to twitter to convey its message to China. The navy is keeping a close eye on the activities of Chinese Navy in the Indian Ocean Region especially after Doklam stand-off. China’s has increased its patrols in the IOR after the stand-off. In October 2017, The Naval Chief Admiral Sunil Lanba gave his approval for the deployment of mission-ready warships and aircrafts in the IOR to effectively counter China’s aggression. During Maldives crisis in February, Chinese warships were seeing patrolling in the region.