After rigorous and hard training of one and half years, third termer cadets get the opportunity to have a glimpse of the lighter side of Army officer’s Life at ‘IMA Ball’. Cadets are allowed to invite their Ball partner for this ball night. “IMA Ball’ is held at the end of every term. This event make cadets realize that they are now ready to step into the world as an officers of Indian Army.

This time IMA Ball  took place on 26th November for the Autumn term, two weeks before the Passing out Parade, which is going to be held on 10th December  2016. This event is also termed as ‘Break-Up Party’ for the third termers. Display of officer like qualities e.g. Courtesy, Chivalry, Gentlemanly were at peak during this event. These qualities are imbibed in gentlemen cadets during the entire course of training in IMA, which makes them a ‘True Gentlemen’. 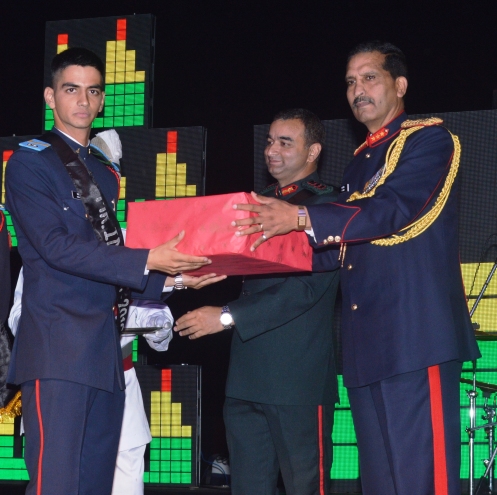 Commandant of IMA, LT. Gen. SK Saini, YSM, VSM set the ball rolling and the evening of joy began with energetic Gentlemen Cadets (GC’s) displaying their talent on the dance floor. Highlight of the event was the selection of Mr. and Miss IMA. Miss Kismat was adjudged as Miss IMA and GC Vipin Semwal  was declared as Mr. IMA. Gift hampers were given to the winners.

With this, count down to the Passing out Parade has begun, the day when these GC’s will be commissioned into the Indian Army as officers.

Journalist and passionate for Indian Defence forces. View all posts by Sumit Sharma